The Hoodoos of Bryce Canyon

What is a Hoodoo?

Bryce Canyon is full of beautiful sandstone pinnacles or “hoodoos”. In fact, it has the highest concentration of them anywhere in the world! How are these unique formations created? The National Park Services tells us the following:
“Hoodoos are formed by two weathering processes that continuously work together in eroding the edges of the Paunsaugunt Plateau. The primary weathering force at Bryce Canyon is frost wedging. Here we experience over 200 freeze/thaw cycles each year. In the winter, melting snow, in the form of water, seeps into the cracks and freezes at night. When water freezes it expands by almost 10%, bit by bit prying open cracks, making them ever wider in the same way a pothole forms in a paved road.”

“Many of the more durable hoodoos are capped with a special kind of magnesium-rich limestone called dolomite. Dolomite, being fortified by the mineral magnesium, dissolves at a much slower rate, and consequently protects the weaker limestone underneath it in the same way a construction worker is protected by his/her hardhat.”
The hoodoos of Bryce create a fairyland unlike no other place on earth. The native peoples of the area also found it magical and created their own myths about it. In 1936, a Paiute elder told a naturalist the following:
“Before there were any Indians, the Legend People, To-when-an-ung-wa, lived in that place. There were many of them. They were of many kinds – birds, animals, lizards and such things, but they looked like people. They were not people. They had power to make themselves look that way. For some reason the Legend People in that place were bad; they did something that was not good, perhaps a fight, perhaps some stole something….the tale is not clear at this point. Because they were bad, Coyote turned them all into rocks. You can see them in that place now all turned into rocks; some standing in rows, some sitting down, some holding onto others. You can see their faces, with paint on them just as they were before they became rocks. The name of that place is Angka-ku-wass-a-wits (red painted faces). This is the story the people tell.”
Upon hearing similar tales, the first white explorers to the area associated this kind of legend with black magic and “voodoo”. This eventually morphed into the “hoodoo” label. 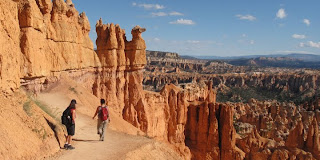