A Tribute to Our Dear Friends 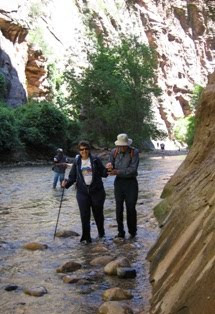 This past Sunday, Adventure Bus lost a dear friend. Carl Clear from Oxford, OH passed away after well fought battle with cancer.
Carl was more than a friend to us-, he was a member of our family. He and his wife Carol have been on 3 adventures with us, and their story has been an inspiration. They had the courage to find love again later in life and live each day to the fullest, despite huge challenges and setbacks. We share their story with you now, to celebrate both Carl and Carol’s incredible generosity and spirit for love and life.
Carol signed up for her first Adventure Bus tour in 2006. She was scheduled to come on an earlier tour, but it was canceled. She was able to reschedule for our June, Grand Canyon and the Wild West tour. About 2-3 weeks before the tour, she called and asked if there was room for her to bring a friend. I said, “Yes, there is still room for her.” And Carol said, “well, what if my friend is a him?” And I said “That is fine too!”
As it turns out, Carol and Carl had just met a few weeks earlier online. Both had been previously married and lost their spouses. They had met each other in person once or twice and Carol decided to invite him on our tour. They figured that would be a good way to test if they were truly compatible. They figured if they could make it through traveling and camping together for a week on a bus, they might have a good shot at more!
So both Carol and Carl came along and had a great time. They loved the scenery, traveling on the bus and meeting the other folks on the tour. They were eager to be a part of everything. They were always up early, helping out with meals and keeping the bus clean. Carl was an RV repair man, and even helped us out with things on the bus a few times! Carol brought little gifts for everyone on the bus, even before meeting them, a tradition they would continue on all of their future tours. 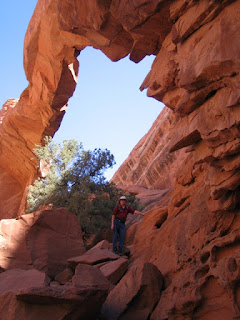 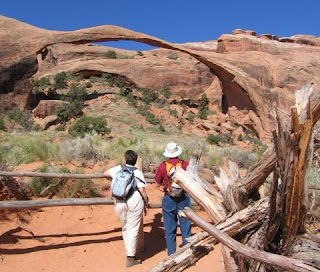 They were completely inseparable on that tour! They were like a teenage couple in the back of the bus, holding hands and snuggling! It was so cute, and you could not help but feel so happy for them. 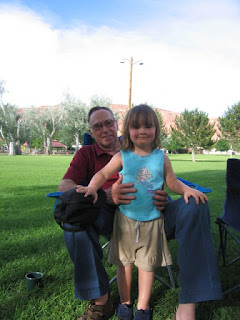 Also on that tour were the Five Foleys-, Tim and Annabel, and their 3 children Eden, Calum and Tess. They had come all the way from England to join us for a tour. It was like instant family. Their youngest daughter Tess, was just 4 on her first tour, and we quickly realized we had our youngest ever, and one of our oldest passengers ever on the bus at the same time, 4 and 70! 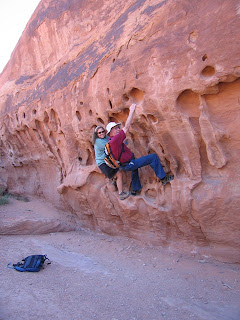 One of my favorite memories, (colored with a little bit of embarrassment!) took place out in Arches National Park. There is a spot along a cliff wall where we rock climb a few feet up the wall, and then someone lays down on the ground and takes a forced perspective photo, so that it looks like you are way higher than you actually are. Well, the first step is a rather large one, and I always have difficulty with it with my shorter legs and weak arms. On that particular day, I pointed out the spot, but I didn’t think anyone in the group was interested in taking me up on the opportunity. Well I made a half hearted attempt to climb up, and really couldn’t make it. Before I knew it, Carl, age 70 was pushing me up, and had climbed up to join me! I will never forget that.

Everyone had such a good time on that tour, that they decided to keep in touch. The following summer, the Five Foleys and Carl and Carol wanted to come back, and since they had so much fun together, Carl and Carol planned to come the same week as the Foleys. That summer it was the North to Yellowstone tour. Carl brought two more members of his real family along for some fun, his two nieces, Jerri and Janet. It was a great reunion with a lot of new and fun adventurers too, including Sharon Marks and her grandson Jered from Ohio, and Brian Houg a teacher from California. This “adventure family” was growing! 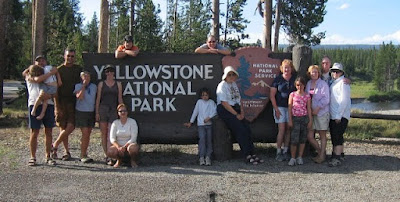 Carl and Carol made it official and got married about a month before their second tour, so we celebrated their one month anniversary with a cake and a campfire in the Grand Tetons. Earlier that year, Carol had a heart valve replaced, but that didn’t stop either one of them from coming on another adventure, and living their lives to the fullest. 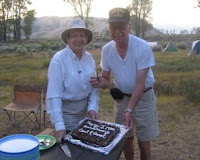 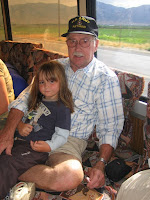 Not long after that, Carl was diagnosed with cancer. That winter he went through several treatments and procedures including the removal of a lung. Despite all that, he made a strong recovery. They returned for their 3rd tour, Colorado Peaks and Canyons. The Foleys, Sharon and Jered, and Brian were all able to come too! It was an amazing feeling to have all these folks reunited for yet another tour. Carl had to be careful on this tour, as the overall elevation was going to be quite high. But you would have never known that he had only one lung! Unfortunately the weather did not cooperate on that tour, and we dealt with several nights of hard rain and mud. Carl and Carol were still right there to help out, even when we had to move the kitchen because we were in mud up to our ankles! 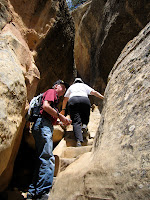 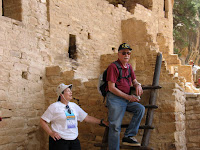 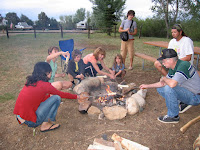 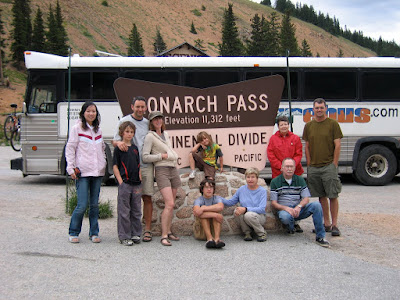 Carl’s cancer came back, as they new it would because of the type of cancer that he had. But Carl and Carol still lived everyday to its fullest. Ardell and I had the fortune to visit them in Ohio, on one of our cross-country jaunts. They knew we traveled back and forth to visit our own families a lot and let us know we could always stay with them. 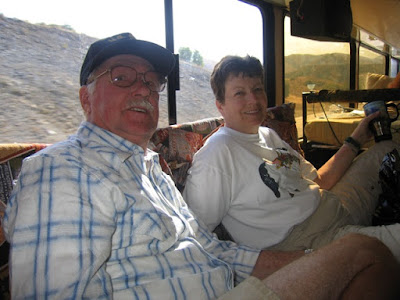 Carl and Carol, we miss you both very much. Carl, we will always remember you for your kindness and strong will. Carol, you are in our hearts and we thank you for all of your kindness, generosity, incredible example of love, and for bringing Carl into our lives.
Take care, and please remember, it really IS… all about the Journey.
Stephanie, Ardell, and the Adventure Bus Crew.

Life on the bus